A study that fosters a pessimistic view of whether life can survive on the surface of present-day Mars. However, I would like to have seen the study continued to see whether it is possible to selectively breed more resistant bacteria. Also this would not affect possible life underground or otherwise protected from the sun.

The silver lining here is that it may persuade the Planetary Protection officers to allow a probe to approach one of the RSLs.

The toxicity of solar radiation on the surface of Mars has been know for decades at the least. I would not be surprised though if some extremophiles have evolved over time to survive near surface conditions. We have seen unusual surface changes, such as the mini-trenches that may be the result of biological activity and there have been a number of detections of methane over the years that could also be caused by microbes.

It would be the best of both worlds (so to speak!) if Mars microbes were resistant to surface conditions while Earth microbes were vulnerable there. In that case, we could more easily confirm Martian life while avoiding the risk of forward contamination.

Given the obvious benefit of using the wind, or meteor impacts, to disseminate spores, it would seem Mars organisms would have a tremendous "incentive" to evolve resistance to surface toxins.

Activity from the near polar realm to the equatorial, in small slides, RSL, and ice concentrations with extreme defrosting or sublimation at the ice concentration spots, all seem suspicious yet may be non-life activity. If the avalanche type activity is not life, why the local effects only?
If the research was produced using a common known susceptible organism, why would the selection be occurring using 'subtilis' rather than any of the more suited organisms on Earth? Was this a method of soothing anxieties of overseers?

For example, recent HiRISE imaging shows action at concentration spots, not margins, and some of the bright fans show action in the dark action zones.

Some Earth microbes use the chemistry tested as a source of energy for continued life in an aerobic atmosphere. Has anyone found why the particular microbes were used? Perhaps they are expected to be transported to Mars with humans with certainty whereas the favorable responding types will not be?

As I found channels cut into inter-dune or lows of dunes, from craters at the margins of claimed gypsum deposits in the circumpolar region, what would the downslope channels be? What causes the activity, avalanche concentrations, massive volume, slope building, or a life like process?
Where would the toxic chemistry be concentrated, and why if Earth microbes can use it, should it be understood as a toxin on Mars? Would CO2 enhance the toxicity of these toxins, or reduce toxicity?

With respect to the question, "why subtilis?" I think the issue is whether the soil bacterium is a a plausible contaminant of rovers sent to investigate RSLs. We need to answer the life question before the "dirty" astronauts get there.

Dana,
Very interesting Hirise image! Looks like a landscape that may have been mineralized while under an ocean, or something...

I am thinking it is not impossible, but very unlikely to find living microbes on the UV expose surface. A foot or two under the surface or under a rock, much more likely. There are other toxins that may also be in play:
Perchlorates on Mars enhance the bacteriocidal effects of UV light | Scientific Reports
https://www.nature.com/articles/s41598-017-04910-3

We need to get swarms of rovers on the ground to really explore Mars and see what is going on.

Assuming we cannot extract all contaminants from manned missions, timing for accidental release is just another aspect of the long term study of survivability of some Earth objects. With many nations vying for a place on the landing list, both Moon and Mars, a prepared study of the results will be our legacy.
The patterns of the barchans type dunes with offsets and repeats reminds me of many of the 'spider' fan patterns in some soils, and the fracture-channels that criss-cross much of the high latitude landscapes match the formation, giving a view of subsurface chemistry and a possibly natural drilling of the current surface. Probably cold and chemistry dominated, but would the toxins be greater in the subsurface zones or right at the surface?
Why troughs in perennial frozen tundra?

Outstanding image Dana. At first glance, sand dunes with translucent Co2 ice dunes overlay. But what is the cause of sudden genesis of domes. The lower areas are isolated, while the dark areas show natural dune formations.

Dana,
Thanks for getting me interested in HiRise!
Here are some images that may be relevant to the discussion:

The winds line up the dunes, changing cross winds and create the dots.

The dark spider spots are described by NASA as outgassing from frozen C02 explosivley bringing up darker dust with it.

And as the season changes into summer:

Here is an area that may represent extensive outgassing:

And finally, here is one idea of how biological activity may play a role:

Back to micro-climate. A natural green-house. They could make a living for a while.

Absent due to some local drama, this Caribbean island article about the 'mystery' of rainfall was a good starter for yet another rant on how little we see as we watch both planets. The internal bright spots in the dark areas of the barchans in the HiRISE image is so curious, as the bright small spots have fan and differing directionality, showing daily variations, even hourly perhaps, during the events we see from such a great distance. These are one to two hundred miles distant, have little detail we can see at human scale, and are house lot to building size lots with little overlap of the local units of action.
Hoping the next HiRISE satellite equivalents have even better optical resolution.
I haven't presented the images of near equatorial craters with blue color band semi-transparent or translucent structures which resemble 'clear' ice of a 3D shape covering portions of the crater floors and walls, as it is nearly impossible to transfer the subtle shape patterns after producing the images on my computer. It appears we have something like ice at some craters. Not supposed to be there as ice, and it may remain a mystery like many others.
Often the blue channel is confusing and has substantial appearance differences from the other bands.
This link to a story of clouds with heavy downpours in just minutes from apparent clear skies shows we can see only a portion of our world, and much is not apparent. I live in a dry core city with a series of 'micro climate lanes' around the city, prevailing wind directions, and within a few miles west and north, and south and east, we see both rainfall and tornado differences which create farming on both lanes, leaving the city often dry or nearly so. We actually feel safe from tornado's here in the city proper whereas local suburb cities are unsafe to live in and are shunned by many.
The conditions of the available pressurized CO2 and water/ice H2O, the actions of seasonal change are just a degree or a few degrees variation perhaps. The same condition degrees of variation control the dust devils in patterned behavior, providing differing opportunities for life possibly.
I lived in a forested area for a time, outside, and life has very distinct domains of activity. Under a tree, in short shrubs, at patches of grass, each climate at small scale is unique and 'just right' for particular life types. Surely Mars has spots that can allow survival for even Earth type life?
CO2 is twenty times as soluble in water as oxygen, and expansion of the ice sheets as they volatize would power a localized climate for seasonal and even daily conditions completely different from open atmosphere Mars. Massive local opportunities in pockets of local conditions, especially at dunes with confined water and ice? Just surmising what we cannot see as yet.
The layering may provide a very different environment even beyond seasons, with repeated conditions routine.
Perhaps it is just refreezing CO2 showing us light core spots when the pressure is reduced? Too much drift in my thinking about both water and CO2 ices outgassing and being pressurized.

In the red dirt 'sand' around me in Oklahoma, much of the concentration of minerals is calcium and iron, with the older layers not showing residual fossils. It was always a curious written mystery as to why so few fossils and where the red dirt 'sand' originated geologically. Other details resemble Mars layering somewhat.
Dunes often begin at points of shaped objects, active zones which are causing the dunes, and on Mars we see the patterned ground effects with fractures , cones, and vertical mixing opportunities from deeper underground through layers.

If the ices are seasonal, transient, and with sublimation to clean the new ice, the amount of clear ice may be sufficient for sustaining life. A recent HiRISE image shows massive inflow to the bright base of the dunes, and I cannot distinguish whether the furrows are a process of movement of material or expanding ice fracturing. Some details show inflow to the solid ground from very shallow slopes, some from steep dune faces, and others are not clear, and appear to extend from the bright material. It would be nice to know the detailed chemistry of these dark spots, bright material, and the furrow content. 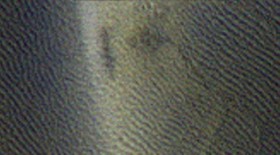 We need to know if active chemistry is underway. This is further north than the Phoenix lander.