The final week of February 2010 brought a number of large and damaging earthquakes around the world, all within the expected and routine zones of repeated former earthquake patterns.
These animated GIF image sets of the globe show the simple seven day processes which gave predictable damages around the world along a vast line of activity. Using a display of the globe viewed from the satellite oversight of the Middle East, the Earthquakes are aligned on both hemispheres on the landmasses of the large Eastern continental mass, and, a combined mass of the Western hemisphere with the African and Middle East combined as a single compensating landmass.
Watch the landmasses covered with earthquakes as both hemispheres are viewed from the one perspective. The Chilean quake is the lower left brightest effect just around the edge of the Earth globe.
All landmasses overlay others in the viewpoint, and all earthquakes achieve an aligned total with only a very few non-related additions.
. 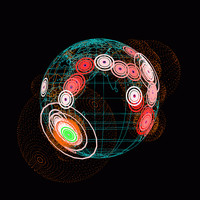 A view of the globe from the same viewpoint, with the African continent on the far left, the Western Americas just behind the African landmass giving the bright series of dozens of large earthquakes, Africa producing none recorded, and the line of activity passing across the Middle East, through the Indo-Asian landmass, with a sizable earthquake just behind the Australian quiet landmass. These patterned landmass overlying quiet continental masses are seen with opposed active zones at other landmass margins, with the tectonics adjustments giving a pattern as predictable as can be imagined.
. 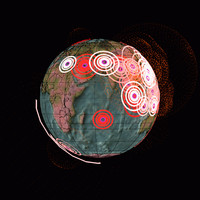 .
These observations cover the week 02/21-28/2010.
All magnitudes and all earthquakes are displayed for the recorded activity in the one week period.
Data from the USGS reportage, using the EQ3d(Earthquake 3D) program by Wolton.

The topic image set was a selection of the earthquakes over the week from magnitude 5.0 and greater, not all the earthquakes, as I referred to. The full numbers are greater for smaller quakes than the larger earthquakes, so here is an additional animated set using the magnitude lines to allow a casual approximation of the number of total earthquakes from the same viewpoint and perspective.
The total number of count here is one hundred plus for the week.
Both large and small are present to allow a detailed view of the pattern for seven days.
As the image is taller than wide, you will need to mouseclick a few times to find the largest image size, and it may be better to download the animated GIF.
I use a free download image editor for viewing the animated GIFs, and in making them. The program is Photoscape, which has an animated GIF subsection in the several editors included. It is quite easy for those who need the process to display information as a graphic image set in sequence.
Combining EQ3d and Photoscape works well for dynamic overlays in most uses, where a GIF file type can be tolerated.
.
Same viewpoint with Chile located on the far side of the globe, hidden by the southern tip of Africa. The landlocked appearance of the total global earthquakes is only clear to view from this side of the globe. One can make the claim of opportunism in the use of the wider landmass of the Euro-Asian landmass range to confine the far hemisphere earthquakes to a landmass apparent occurrence, using a transparent reportage with a visual of the wider land area.
The complexity of several actions and causes is always a matter beyond a single conversation. This also carries beyond a single landmass as a subject.
.

.
Perhaps this will bring my statements into register with the images for more confidence in the viewing and interpretation.
All magnitudes for one week.
The South American coastal earthquakes number more than 150 during the week.Many were 4.0 and greater. The strongest was estimated at 8.8 .

Earthquakes of large displacement have a significant effect on the planet globally.

The fact not mentioned in the article is that tectonics uplifting to the present distance from the axis of rotation also has a countering effect, and that would be a similar difference. Ice age alteration of the ice on elevated land or above sea level also has effects, and they are additions in a long series of adjustments. Isostatic compensation and related movements causing earthquakes is often related to additions or removal of thick ice surface masses, or subsurface adjustments.

Imagine the effects of these two icebergs which are now broken free of the Antarctic ice cap, as they are redistributed, and, alternatively, if they were deposited over high elevation dry land, at height, then melted by global climate changing conditions. As this happens constantly in varying amounts and to excess in periods of cold and heating, we are seeing earthquake adjustments as the masses are traveling across both liquid and 'dry' land.
Elevation changes and mass re-distributions are causing some of the earthquake patterns, as the tectonics blocks are in motion across and over and under the other sections, with the masses and elevations applied and removed by changing climate and land(solids) redistribution in the interactions.

The effects are both climate and movement related, giving compensation a series of timings to match the liquid phase water(solvent) application from the atmosphere, climate alterations, and tectonics motions.
Adding volcanism to the mixture of adjustments, as in the Central and South American regions, and it becomes easier to imagine the spinning Earth's mass controls climate, and additionally, the climate and surface effects control the Earths rotation and axis orientation.
The real power in the engine, is the sea floor spreading mechanism, which provides new replaced, changing, sea floors in the tens to hundreds of millions of years timing, giving a mass movement and powering much of the other aspects of the Earths surface effects.
The redistribution of fresh water and human use can be be seen in the estimate that the two icebergs are approximately one-fifth of the total yearly human use of fresh water by volume(or mass) and the portion of the polar cap total for these two is a tiny fraction of the total solid ice remaining at the caps currently.