A NASA spacecraft plans to image the active comet nucleus of Comet Hartley 2 during a 435 mile-long flyby on November 4th. This will be the 5th comet to have a close-up image taken of it's nucleus. Comet Hartley 2 is unusually fizzy or offgassy and the gas it emits is greenish in space due to presence of cyanide. This will be our first close encounter the most active and greenish comet yet.

New radar images of the core reveal it to be shaped like a bowling pin or a pickle:

The 'sunshine combined image, works best for me thus far of the few available. Is the conjoining of two items possible here, or, with the surface so active and covered by linear 'scale' like polygon patterns, is the surface showing an active material all through a single body?
I see on the smaller end lighting effects faintly of dual angled counter spiraling surface shading, or, with slight imagination, a deeper fracturing of possible impact 'spalling' or active mineral/chemical ordering of material throughout the comet.
The largest imaging shows what could be mistaken for a translucent view through the smoother joining material. With several angles of view it both appears valid as a view through surface material, and a view of a deeper conjoined layered material applied two two similar bodies, giving the sunlight angles an illusion of conjoining objects, or, a surface following weaknesses which are seen as passing through the central portion of the singular body.
Any final verdicts from professionals on the possibility of inactive volatiles dominating the central area?
The scene reminds me of the concept of a slab of material under compression, with the outer ends lacking compression and vesiculating, so, I reversed the cause in my imagination, and try to imagine a residual accumulation of the central material after low energy volatiles have escaped, leaving a dusty central buildup of material.
Then again, I suppose the residual impacting from the ends could have left a 'shock cone of material, without a single source body being left in the current scene.
I saw in altered views a subdued core round item with a sunburst of smaller rays or bright lumps ringing it along the smoother central portion, but it is very subtle in tonal variation, so I haven't uploaded a view of it as yet.
The backlighting angles sure gives an illusion of transparency in the finer shading lineations if it is an illusion.

This is very altered, and therefore degraded from the original, but the illusion of translucency, versus the probability of an altered material from either a shock cone impact event or residue from volatizing dusty accumulation reforming, is shown as a strong set of details here.
The original does not show this without concentration and enlargement.
Reduced to about 32 tones here, altered DPI and size from the 'sunshine' original.
. 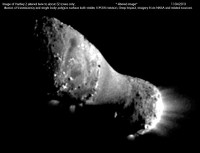 This is a view of the overlapping of layered material which gives either the illusion or accurate view of translucency in the middle portion of Hartley 2, the comet.
Several of the angles of view in this mission give this same impression of transparent material seen through a depth of layers at least tens of feet thick.
It is difficult for me to imaging this scene as accurate as it appears. The layered materials at the surface seem to carry across the layers finer patterned shapes which are seen in perspective at these angles, and which would be unlikely to have this pattern recorded as it is seen, unless the middle portion of the comet is really transparent.
Any one find an explanation for this 'illusion' other than transparency?
Back lighting can produce some illusions and distortions of geometry at times, and this is reduced in tonal display to about 32 tones only, strengthening the impression slightly.
.

.
Taken from the combined image named as 'sunshine' on the NASA related site, not from any secondary sources. Altered here by myself, but I can show an original not so altered to help confirm the information.
Geometry and surface particulars over multiple layers, or is there a real view through the surface layer?