Hi there. NASA says the rock is a meteorite, but I've detected some strange markings on the meteorite. The first phew can be found on the web:
http://marslives.blogspot.com/

I've found some more, since I'm analysing the microscopic images now of the rock ... This certainly is NO meteorite!

A very intriguing close up of the meteorite - angular inclusion jutting out the surface, a fresh "hole" in the dust on the surface (is this from one of the rover's instruments?) 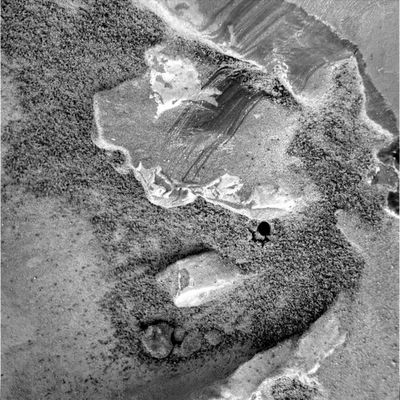 Ever since that 'meteorite' was said to be a 'meteorite' by NASA, I could not have helped but notice the lack of a CRATER this thing should have left when it hit the surface. I am sure it didn't roll there, or was BLOWN by the wind! Even the flimsy heat shield made an impression and OPPY has photoed the hell out of that.

I suggest that it is an original artifact of MARS and not a meteorite.

Anyone who has ever read any book on astronomy and noticed impact results from meteors would gather immediately the lack of such an impact site deficiency. They go together. Rock>gravity>impact>mess. The Moon is a good simple example for the reference.

So how could this thing be called a 'meteorite'.

What is it really?

No RAT test was initiated by OPPY>>that from NASA. OK that's fine...they seem to suggest that the material is nickel and iron...very hard and the Rover RATS were designed to cut rock..ok on that too. That part makes sense.

The surface markings seem to indicate a heated molten bubbly event took place and consisting of nickel/iron not much erosion has taken place, either.

Its sitting there amongst the 'berries' without any sand accumulation around it, which would indicate an early arrival to the surface...unlike the rocks that Spirit has shown us, weathered, pointed, jagged, smooth-faced, etc... A difference of material too.

It is a puzzle, and a good one. Not much has been said about this thing that would enlighten us.

I am going to make a 3D of it for a better look.

thx dx. Would love to have a copy (if possible) of your 3D image of the rock. I've allready found another strange 'rectangular' object sticking out of the meteorite, that can be seen on a phew of the images the microscopic cam made of the rock.

PS: Daz, this is indeed an image taken by opportunity of the so-called meteorite.

a 3D image hurriedly done, I also had to change servers, and that took some time...I will be preparing a better image now that I am set-up again with new servers.

I will need a few more days, but you should get an idea from the picture of the 'meteorite' even though its not the best.

Plaxis Ent. All about Plaxis
http://www.paxchet.info/980847.html

Plaxis Ent. All about Plaxis
http://www.pxchechert.info/980847.html

Okay. Why is the picture missing, and the
Geocities link of the 3d image is also coming up with nothing?

Solar radiation on Mars is so intense that it could endanger astronauts, according to NASA. This radiation also means that, despite the presence of water, it's unlikely any life could survive there. The high radiation levels were measured by the Mars Odyssey spacecraft. Cary Zeitlin of the National Space Biomedical Research Institute, says, "[Mars life] would have to be pretty robust against all kinds of environmental horrors."

This news comes at a time when scientists had new hope for finding life on Mars, since most of them are now convinced the planet has water. Near the planet's north pole, frozen water makes up as much as 75% of the top 3 feet of soil, according to researcher William Boynton, who says, "We're talking ice with a little bit of dirt mixed in it and not the other way around."

NASA once thought astronauts could use that ice for drinking water, fuel and oxygen, but the new radiation findings suggest that would be risky. Now Mars exploration may be limited to robots. Mars is continuously bombarded by radiation from the galaxy, as well as by periodic bursts from the sun. On Earth, our magnetic field and atmosphere protect us during the sun?s radiation blasts. Mars radiation would expose astronauts who were in orbit, and not even actually on the planet, to a dose 2.5 times greater than they get aboard the international space station. A three-year Mars mission would expose astronauts to the upper limit of radiation that's considered safe by NASA, so afterwards, they'd have to quit exploring space and take desk jobs. Researcher Jeffrey Plaut says, "It still remains to be seen what the hazards are on the surface." my quest,,, Now how did astronauts walk on the moon closer to the sun